Curacha is famous in Mindanao, especially in Zamboanga. It’s a spanner crab or red frog crab, a crustacean hybrid native to the waters of Zamboanga and Sulu. It can be cooked with sauce or steamed.

Transfer to a serving dish and serve.

This chicken recipe involves sauteing chicken with onion, garlic, and ginger, then stewing in coconut cream. To make the dish more flavorful, native chicken is used.

Satti is a popular breakfast food in Mindanao particularly in Zamboanga. It’s actually three small bits of meat (beef and chicken liver) grilled in a stick similar to a barbecue, only it is served along with rice balls swimming in a sweet spicy sauce.

First of all, we’re going to list the ingredients you need to make satti sauce:

Now let’s get down to business and give you the recipe for satti sauce:

Biryani dish is said to be a food made by the Muslim community in Indian/Persian region. So it’s no surprise that this delicious recipe has made its way to the Muslim community as part Mindanao cuisine. Biryani is basically a fried rice dish with bits of chicken or seafood and other spices.

Pastil is a popular Mindanao food found in the street of Maguindanao. It’s basically a rice covered in banana leaf with chicken or beef adobo strips as fillings, which proves that Mindanao cuisine is more on easy-to-follow recipes. Zamboanga has also their own version of the dish. Their pastil is like an empanada, but instead of pork and vegetables, pancit noodles (rice noodles) are used as fillings.

Half an onion, thinly sliced

One Pastil usually sells for Php10 in Davao City.

Kansi is an Ilonggo beef stew which is very popular in Bacolod City. The soup has batwan as its main souring ingredient. The soup tastes like a combination of sinigang and bulalo.

This particular seaweed or agar agar as others call  it, is very much common in the coastal waters of Visayas and Mindanao. The only difference is that, instead of serving it fresh garnished with onion, tomatoes and vinegar, the Tawi Tawinians blanch the seaweeds then added with little soy sauce and some spices like ginger, onions , giving it a yellowish color.

A dish acquired by Maranaos in Southern Philippines from their neighboring country Indonesia. The Filipino version of the dish is a bit different in terms of preparation methods to suit their tastes and some ingredients are substituted with local components. Maranao’s rendang is prepared by crushing the spices before frying and cooking it with the beef and coconut milk. The dish can also be described as a caramelized curry.Beef rendang is an Indonesian spicy dish and no wonder the cooking is similar to our local dishes because Filipinos also have Indonesian ancestors. But this beef rendang dish has a more tedious way of preparing. You have to make a spice paste first by grinding it on the mortar and pestle and frying it before cooking the beef. Unlike most Filipino cuisines that we throw everything in the pot when cooking. There are also some ingredients that are only indigenous to Indonesia and some parts of Southeast Asia like the galangal, very similar to ginger root in texture and shape but has a more exotic taste. But is can be substituted with ginger. Now you don’t have to go to Indonesia to taste this dish, you can cook it right in your own kitchen.

The knickerbocker is made of a mix of fruits (slices of mango, banana, apple, and watermelon), gelatin, shaved ice, and sweet milk, with a scoop of ice cream on top. It doesn’t look much, but it’s actually very sweet. 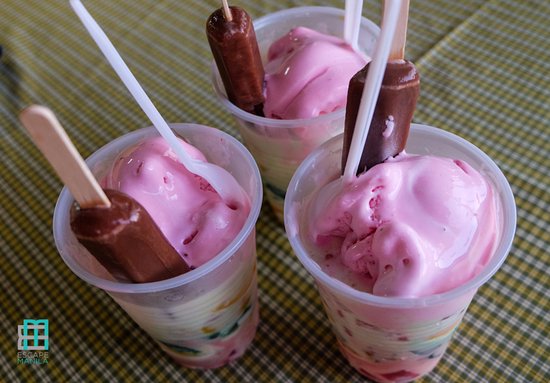 JunMags has been cooking for more than 50 years. As a child and later on as a teen, this was how he prepared Cagayan de Oro’s version of Sampayna or Dinuguan. This, he says, is an old recipe. Instead of prime cut meat, the main ingredient is pig’s small intestine, cut into small pieces. 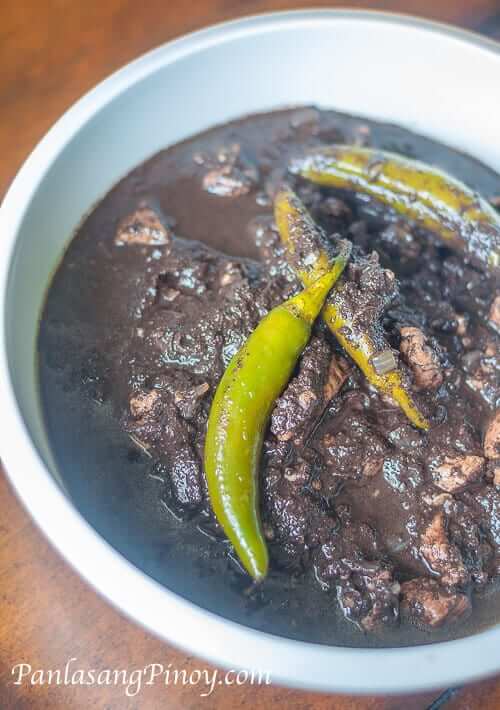